skip to main | skip to sidebar

Time's been on my mind as of late, where it goes, how it changes things, and acts in so many ways.

Time is an amazing healer. Apply enough time to almost any wound and notice how the pain dulls and fades away, at times making it seem as though the event never even happened.

Time can bring perspective, and yet it can twist it as well. It's amazing how it can make horrible things seem not so horrible, mediocre things seem great, and work in reverse as well. Have you ever thought back on something that seemed life changing at the time, but in hindsight life went on and hardly skipped a beat? How about the friend who you'd forgotten was so amazing and felt great to be around because time had stepped in between the two of you?

Time can be so cruel, and sometimes we feel like we're a slave to it with not enough hours in the day; yet time can seem like such a gift when there is so little available to us and we can appreciate just waking up each day.

Time, it keeps on ticking.

Saying Goodbye to a Childhood Friend

Today death appeared in my inbox. I was at work when I received an e-mail from an old mission companion notifying me that a mutual friend of ours had been murdered. It was a weird sensation to realize that the news story I kept hearing about on the radio about a body found in an LDS parking lot now had a name and a face put to it, and it was a childhood friend who was like my little brother growing up.

As I sat there processing the information, I remembered having had the thought in the last week or two that death isn't something that really gets to me like a lot of people, that I can accept it for what it is, and while obviously saddened for the loss of loved ones, it's not a terrible thing. But THIS, this did get to me. I felt my heart grow heavy immediately, and I realized that this IS a terrible thing!

I think that too often I allow myself to think that I'm more in control of myself and my emotions and my environment than I really am, and I think that I am able to do this because very rarely do I come up against circumstances where this mental illusion is challenged. It's easy to feel removed and unattached when reality is not right there, standing in your path demanding honesty.  The truth is that I'm NOT in control. I'm not in control of my environment and all the forces that are involved in it. Sure I can safeguard myself, and sure I can make decisions that shape my future and events in my life, but things can change in an instant as Mike found out last night as he had has life taken from him, and hearts can be devastated as his friends and family found out this morning upon the delivery of the heart-breaking news.  I'm not in control of my feelings either. Sure it's one thing when a grandparent passes away who has lived a full life and you have time to deal with and cope with inevitable. I don't necessarily feel the need to be heartbroken in circumstances such as these. BUT situations like these are hard to accept with a glad heart because I know that last night the world was cheated yet again.

I haven't spoken to Mikey in years, and I haven't been close with him since we were kids, but I know who Mikey was when we were kids, and from reading people's comments on Facebook, it's apparent that he stayed his kind, fun-loving self up until his last breath. The world is ALWAYs cheated to have a person like Mike taken from it, and it truly is an event to be mourned, and an experience that no family or friend should have to cope with...and yet so many do have to find their way through these tragically dark times in which there must often appear to be no light at the other end. Knowing that Mike's family was cheated of many more years of memories and experiences with them just makes me want to cry out for them as I imagine the heartache and grief that they must be going through right now.   Time will move on and eventually the hurting and the pain of Mike's loved ones will subside and eventually heal if they turn to the Lord and seek his comfort, but I have no doubt that Mike will always be remembered by those whose lives he touched as he brought cheerfulness to those around him. 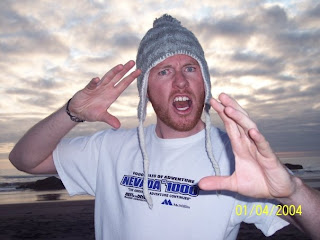 A beautiful, still summer night, I'm driving down a back country road. Windows down, sun roof open, a warm yet refreshing night breeze flows through the car. A familiar yet unknown melody of a classical composition plays in the background. On a familiar path traveled much before, yet still uncertain of what might emerge at the end of my headlight's beams as the unknown presents itself. It doesn't matter. For this short stretch of road, everything feels as it should. For a brief few minutes, everything is in harmony.
Posted by Unknown at 10:57 PM No comments:

Still summer nights with just the right breeze are my favorite therapeutic relief when life is weighing me down. Weight lifted.
Posted by Unknown at 9:26 PM No comments:

You know you're a cheese ball when...

It literally makes you sad that Winnie and Kevin, from the tv show The Wonder Years, don't end up together...and it never gets any easier every time you watch the concluding episode.

I'm not admitting to anything. Only sayin'...
Posted by Unknown at 11:17 PM No comments: 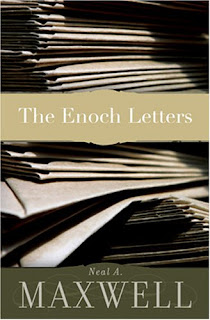 Unbeknownst to me, Elder Neal A. Maxwell wrote a short book called The Enoch Letters. It follows the same idea as The Screwtape Letters by C.S. Lewis.  Elder Maxwell's book is much shorter and all but the last letter are from the pen of the character Mahija who becomes one of the residents of the city of Enoch. I highly recommend reading it as it's a short, fun, but very poignant collection of principles and lessons. Here's a few of the quotes that stuck out to me:

"Each of us must not not only renounce evil, disengaging from doing wrong, but we must also engage anxiously in doing much good. Only then can a mighty change occur."

"the subtle and wonderous efficiency of righteous unity is found in the manner in which it moves each man to do more than he ever imagined, or even wanted, to do himself. Seeing others pass a supposed breaking point without breaking , going a second mile with a burden they are only required to carry one mile, witnessing those falsely accused persist in sweet patience--there is a clear contagion in such things."

"rules are useful...but these must merely mark where the borders of conscience end. Rules have a way of pushing conscience back, and yet farther back...a lively conscience can cut through to the justice of any situation."

"Repentance takes care of the past, faith in the future, and the Holy Ghost helps us with today."

"As I involve myself in the give and take of life here, I first check for the presence of pride in the midst of my emotions. Often when I feel wounded, upon sober reflection, I see that it is my pride, not a principle, that is the cause."

"Undivided, we are multiplied"

"To dissent merely to display one's freedom would be a mark of one's bondage to pride. "
Posted by Unknown at 10:13 PM No comments: 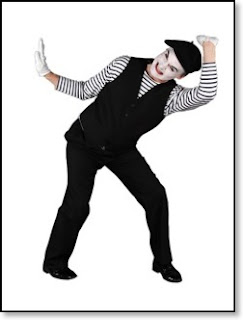 See the creepy mime above? Look ridiculous? Yeahhh, lil bit. You might even be thinking to yourself, "never going to see me do that!" Don't be so quick with the pronouncments, my friend.

We live in a land and culture that glorifies freedom. Freedom from oppression, freedom to seek out new opportunities, and the freedom to live our lives how we want to.  Sure not everyone has the same playing field, but we're also not stuck by social rules into a caste system. The freedom is there to overcome the odds of poverty, barriers to education, and other disadvantages that we may have been dealt. If you're religious, there's a good chance that your spiritual outlook is also based around freedom. Freedom from appetites, freedom from temporal things, and freedom from anything that holds us back from true happines and peace, what some might even refer to as nirvana.

So what's freedom got to do with a creepy guy (No offense, Mr. Mime) in an imaginary box? Look a little closer. Recognize yourself yet? Okay, so let's hope that isn't really you. If it's a family member, I apologize.  Obviously that's not literally you, but I bet that if you think for a while, you can figure out a specific time in life, or maybe even a certain ongoing area(s) of your life where you do put yourself into an imaginary box (I ain't hatin' if you've put yourself in literal boxes for entertainment. I'm just as guilty as the next. What? It's been a rough economy, alright?). So why do we do it?! What a juxtaposition of mindsets! Where is the logic here? "I want to be free so I can limit myself?" What is it about human nature that dares to envision uninhibited range of motion in our lives, and at the same time allows ourselves to entrap ourselves into these imaginary, and closed in spaces?

It literally breaks my heart to see good, genuinely kind people hurt themselves by submitting themselves to the same inflictions time after time. Whether it be destructive addictions like pornography, drugs, alochol, etc. it makes me sick inside to see these people turn back to what never has brought them happiness and what never will. Especially those who find themselves going back to the same type of individuals for relationships, because they don't see that there's so much more out there. It doesn't seem to matter how badly they were hurt before.

I know there's a lot of psychological theory behind these types of situations, and it's not as easy as just walking away a lot of the time. But I'd argue that a lot of the time we only contain ourselves in these restricted parameters because we don't really know what we're looking for, and maybe we're too scared to really take the time to find out. As much as we like to talk about the grandiosity of freedom, maybe just maybe we're more comfortable with set boundaries of those things which we've experienced. Maybe it's time we as humans start doing away with boxing ourselves in, and instead start learning to box the junk in our lives out.

Posted by Unknown at 8:46 PM No comments: